Weatheradio Canada is a Canadian weather radio network that is owned and operated by Environment and Climate Change Canada’s Meteorological Service of Canada division. The network transmits in both official languages from 230 sites across Canada.

You can listen to The weather radio by using 162.550MHz located in Rosseau or by rebroadcast on CBPO-FM 88.9 FM Parry Sound.

APRS data is typically transmitted on a single shared frequency (depending on country) to be repeated locally by area relay stations (digipeaters) for widespread local consumption. In addition, all such data are typically ingested into the APRS Internet System (APRS-IS) via an Internet-connected receiver (IGate) and distributed globally for ubiquitous and immediate access.[2] Data shared via radio or Internet are collected by all users and can be combined with external map data to build a shared live view.

APRS has been developed since the late 1980s by Bob Bruninga, call sign WB4APR, currently a senior research engineer at the United States Naval Academy. He still maintains the main APRS Web site. The initialism “APRS” was derived from his call sign. 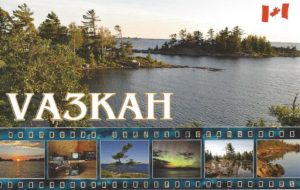 The little Island heard around the world.
Updated June 2019

Kah-She Island in Georgian Bay, one of the Great Lakes is heard round the world.

The cottage magazine Sideroads published a six page story on Kah-She’s beacon in the May 2016 issue: